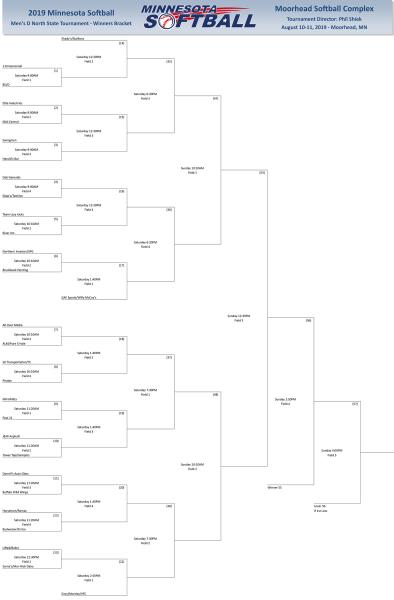 Competition should be fierce at Minnesota D North State Tournament
Posted on Aug 08, 2019

With just one team pre-qualified for nationals, it should be plenty competitive as squads fight for national tournament berths at the Minnesota Softball Men’s D North state tournament Saturday and Sunday at Centennial Softball Complex in Moorhead.

Only Shadys/Stallions, out of Albany, already qualified for nationals, so the rest of the field of 29 teams looks to be one of the top-four finishers to earn a bid.

Shadys/Stallions finished tied for fifth at the Shakopee Lions D bracket and earned one of three first-round byes for North State. Shadys/Stallions awaits the winner of 1-Dimensional (Little Falls) and BLVD (Moorhead). GAF Sports/WillyMcCoy’s (Bloomington) also has a bye, facing the winner of Northern Invasion/SPG (Elk River) and Brushback Painting (Alexandria). Envy/Morries/VFC/BEB (Minneapolis) is the third team with a bye, awaiting the winner of Lifted/Baker (Columbia Heights) and Sarna’s (Elk River).

Full brackets can be found here.