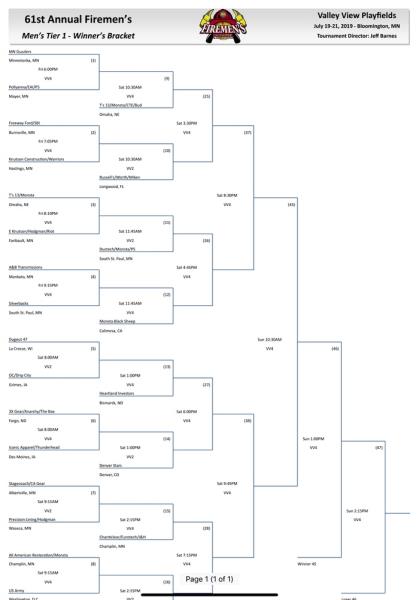 It will be busy in Bloomington this weekend, with the 61st annual Virg Ellrich Memorial Firemen’s Slowpitch Softball Tournament taking place at Valley View Playfields and Dred Scott Playfield.

More than 150 teams will compete across six divisions Friday through Sunday.

The men’s Tier 1 bracket is double-elimination, featuring 24 teams, and sees Heartland Investors out of Bismarck, N.D., return to defend its 2018 title. Runners-up T’s 13/Monsta from Omaha, Neb., is also back. The field also includes Stagecoach/CA, which won the Mound Early Bird BC division title, Silverbacks — which owns a national tournament berth — and four other teams with national bids. The first-round games begin at 6 p.m. Friday, with the championship set for 1 p.m. Sunday. A second title game will be played at 2:15 p.m. Sunday if needed.

The men’s Tier 2 bracket has 40 teams in a double-elimination bracket. The first round starts at 6 p.m. Friday, with the championship set for 3:35 .m. Sunday, and a second championship starting at 4:40 p.m. if necessary.

The men’s Tier 3 bracket has 36 teams in double-elimination play. MN Heat/Cardinal Bar returns as the reigning division champion. The first round begins at 6 p.m. Friday, with championship bouts set for 3:35 p.m. Sunday and 4:40 p.m. if a second title match is needed.

Eight teams face off in double-elimination play in the men’s Over-40 field. 2018 champion Fuzzy’s is back to defend its title. The first round begins at 6 p.m. Friday, with the championship scheduled for 5:45 p.m. Saturday and a second championship at 6:50 if needed.

The Co-Ed division is a double-elimination bracket with 24 teams. The first round kicks off at 6 p.m. Friday, with the title game set for 3:35 p.m. Sunday, and if needed, a second match to follow at 4:40 p.m.

The Women’s division features 24 teams in six pools to play Friday and Saturday, which will transition to single-elimination bracket play for Sunday. The first-place finishers in each pool compete in the 164 bracket Sunday, with the title match at 12:20 p.m. The second-place finishers in each pool compete in the Gold bracket, with the title game set for 4:40 p.m. Sunday; the third-place teams in each pool play in the Silver bracket, and the championship is at 2:30 p.m. Sunday; and the fourth-place teams play in the Bronze bracket, with a 2:30 p.m. Sunday title game.

Full brackets for each division can be found at https://slowpitch.mnsoftball.com/brackets. A free after party starts at 9:30 p.m. Saturday at the Bloomington Eagles Event Center.