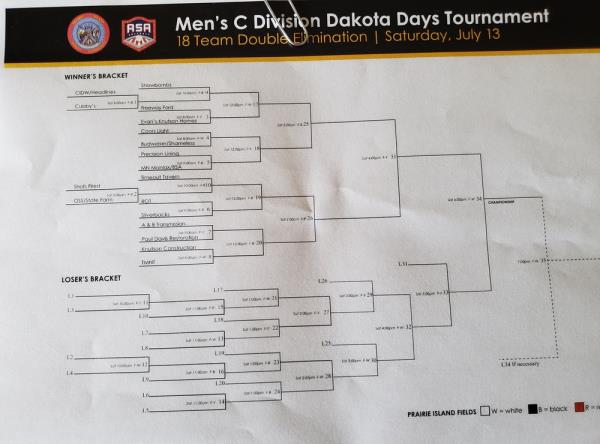 Three nationals berths are available for both Men’s C and Men’s D divisions at the ninth-annual Dakota Days tournament in Prairie Island July 13 and 14.

The 18-team C bracket features some returning teams such as Silverbacks and Coors Light battling for a top-three finish. The first round features: Showbombs vs. the winner of CIDW/Headlines and Cubby’s; Freeway Ford vs. Evan Knutson Homes; Coors Light vs. Budweiser/Shameless; Précision Lining vs. MN Maniax/BSA; Time-out Tavern vs. the winner of Shots Fired and OSS/State Farm; ROT vs. Silverbacks; A&B Transmission vs. Paul Davis Restoration; and Knutson Construction vs. TMNT. The championship game is set for 6 p.m. Saturday, with a second final to be played afterward if needed.

In Men’s D, Jack’s/MM/Heat and MN Heat are teams to watch in the 16-team bracket. The first round matchups include: Polyanna vs. Lifted Optics/Baker Drywall; 5 Star Processing vs. Rooster Tail; Émond/Mulcahy vs. Rounders; DAB Generals vs. Hostile; TMNT vs. Express/MM Construction; MN Monsters vs. Nasty Boys; Jack’s/MM/Heat vs. MN Heat; and Big Daddy Hacks vs. Renegades. The championship is scheduled for 6 p.m. Sunday, with an additional game to be played afterward if necessary.

The field features plenty of new teams in the ninth edition of the tournament. The Prairie Island complex is next to Treasure Island Resort and Casino, and was named the 2018 USA Softball Complex of the Year after hosting the Men’s Class B and Class C national championships.