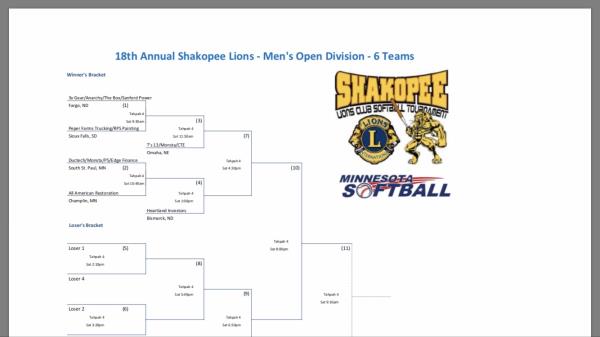 The 18th annual Shakopee Lions Softball Tournament this weekend features 82 teams across four divisions, and has national qualifier bids on the line in two brackets.

T’s 13/Monsta/CTE, out of Omaha, Neb., returns as the defending Men’s Open champions after going undefeated in the 2018 tournament. The Open division features six teams this year, down from eight a year ago.

The Men’s D bracket is the largest field of the tournament, with 40 teams — up from 32 a year ago. The Crew, from St. Paul, won the division in 2018. The top four teams will earn national qualifier bids.

There will be a new champion in the Women’s division, with 2018 winner Carl’s (West Des Moines, Iowa) not among the eight teams in the field.

The tournament runs Friday, May 31 through Sunday, June 2 at Tahpah Park in Shakopee. Brackets are available on the tournament’s Facebook page.